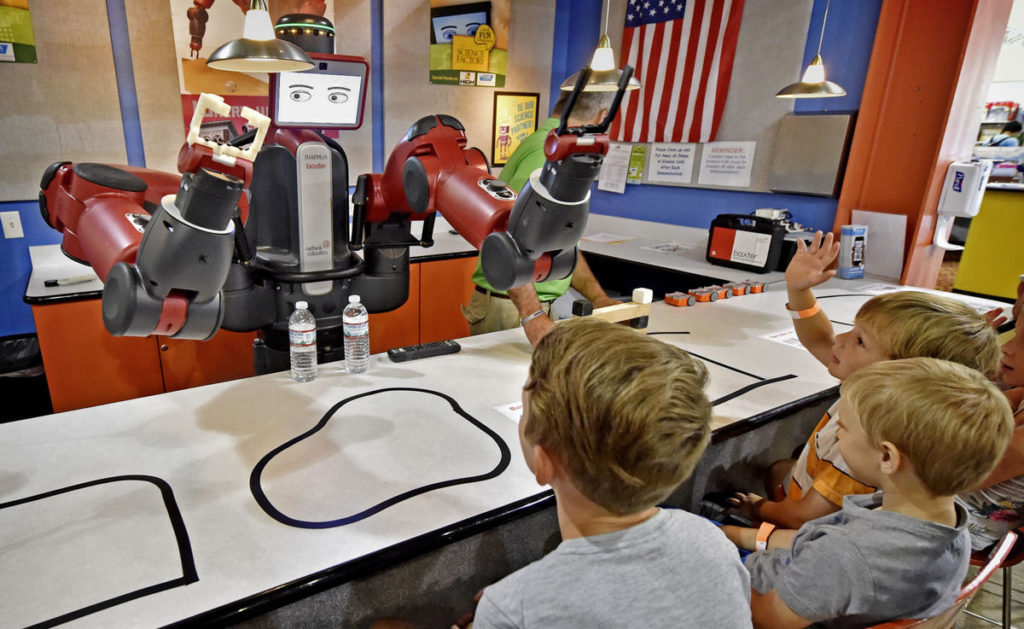 Baxter the Robot waves to kids during a presentation at the Lancaster Science Factory. Photo courtesy of Blaine Shahan, LNP Staff Photographer

The latest presenter at Lancaster Science Factory’s science cafe is a builder.

He can assemble a small structure by grabbing blocks, one-by-one, and stacking them on top of each other. Show him how to disassemble it, and he’ll undo everything he just built. Afterward, he’ll even wave goodbye.

His name is Baxter. And he’s a robot.

Baxter, a human-like “pick and place” robot owned by Thaddeus Stevens College of Technology, wowed kids at the Lancaster Science Factory on Monday as part of the college’s STEM-in-GEAR program promoting science, technology, engineering and math education throughout the community.

Jacob Smoker, a 12-year-old home-schooled student, was one of about 10 kids who participated in the workshop. He said he was fascinated by the fact “that you could program (the robots) to do whatever you want however many times you want.”

“In the future,” he said, “robots could be cleaning your room and … (doing) stuff that we usually don’t like doing.”

Getting kids to “awe” at what’s happening in science is what this workshop is all about, Nolt said.

“I think it’s all just about helping kids discover where their passion is, what lights their fire,” said Nolt, who is employed by Thaddeus Stevens over the summer as part of the STEM-in-GEAR program but teaches technical education at Manheim Township High School. “That’s what kids struggle with in school — being motivated.”

By simply moving Baxter’s arms once to a desired location, Nolt can program the robot to continuously wave, pick things up, move and drop them — with some exceptions.

Baxter can only pick up objects weighing at or below 5 pounds. And, sometimes, Baxter isn’t the best listener.

“Bad Baxter,” Bob Herbert, the factory’s director of operations said as Baxter misplaced a block. “No oil for you.”

These fun, hands-on activities help kids understand science by allowing kids to step into reality instead of just read a book, Herbert said.

“That’s what we do,” he said. “The science factory is about getting kids excited about math and science at a very young age. It’s also about building curiosity and building confidence.”