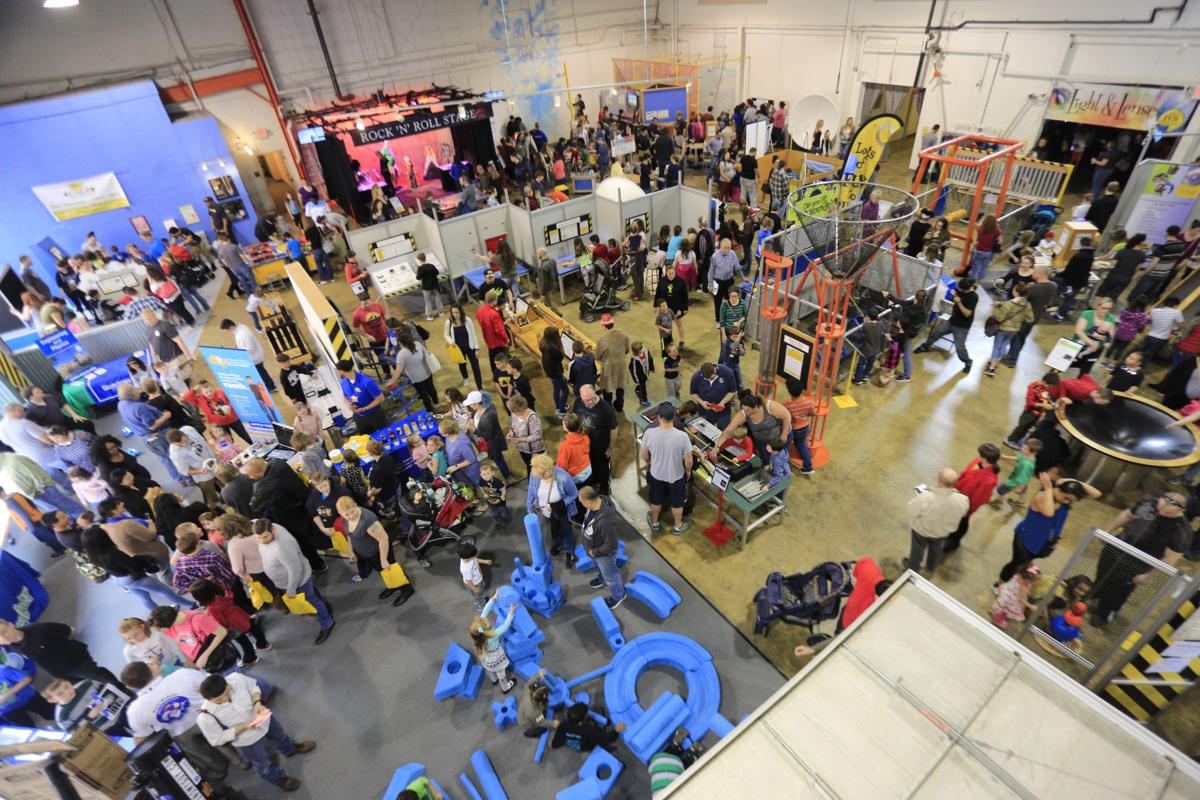 As she worked her way through the crowd of people at the Lancaster Science Factory, Emily Landis couldn’t help but smile.

Landis, executive director of the Lancaster Science Factory, 454 New Holland Ave., Lancaster, had a right to smile. The free annual “Science is Amazing!” Festival attracted a record crowd of 2,100  Saturday.

With more than 65 hands-on exhibits and new exhibits at the rock’n’roll stage and by Make 717, a nonprofit innovation center, the Lancaster Science Factory’s biggest day of the year became huge.

And, truth be told, it wasn’t just Lancaster Countians who were making things. Deanna, 10, and Danea Truxler, 9, who recently moved to Chester County from Virginia, were looking to make a toy chair and a toy shark using mini 3D printers.

Nearby, Emily Buckwalter from Akron, was soldering wires together to create a “robot badge” that blinks.

At the rock’n’roll stage — a collaborative effort of Clare Global, Tait Towers, Nimblist and Control Freak Systems which assemble stages for some of the biggest music acts in the world — youngsters turned knobs to mix lights and mugged in front of microphones.

The exhibit, said Nimblist employee  Christine Witmer, “shows them how light works by mixing different colors, and how sound works.”

Standing beside the stage was a decidedly old-fashioned, but important physical  science exhibit: Examples of the specific knots used by riggers to move and hold stages together.

Not far away, Gavin Lyter, 9, of Lancaster, and his sister, Gaia, 8, were  using ropes to attempt to lift 100 pounds using a series of pulleys. The pulleys, which are a permanent exhibit, show how handlers can more easily lift dead weight by increasing the number of pulleys attached to the weight.

In a room adjacent to the main floor, educators from area colleges were testing child development as children played games. One game included judging whether a tall skinny jar had a greater or lesser volume than  a shorter rectangular jar.  Lauren Howard, assistant professor of psychology at Franklin & Marshall College,  said the volume of the jars was the same, but that younger children have a difficult time recoignizing that.

“As we get older we hypothetically get better at that,” she explained.

At the Science Cafe, Chuck Williams demonstrated the wagon-wheel effect.

“Your eyes have muscles,” he said, “and we’re going to make those muscles tired.”

The group of mostly girls were told to focus on a spinning disk for 40 seconds. Then he said, “Now look at me.” That drew a gasp from one girl who said Williams’ head  looked much larger.

Williams has been a mainstay at The Lancaster Science Factory. He has volunteered for more than 1,000 hours, and is known for  producing clouds in bottles and demonstrating how certain elements in  water  change color when illuminated with a black light.

Landis was thrilled by Saturday’s attendance.

“It was thrilling to see so many people of all ages excited about science, engineering and technology, eager to learn,” she said.